In a continued frenzy of modding, I’ve completely redesigned Headcrash to be a lean, mean rig. It’s been stripped down of all extra hardware and now exists to serve up test web pages, dedicated game servers and act as a test server for other applications.

In the spirit of this new approach, I’ve also updated its look, updating it with some new-style modding gear like a CCFL, some quiet Panaflo L1As and Vantec Stealth fans and a dual voltage baybus, while preserving it’s old-school modded-HX08 look.

I ditched the 5-drive ghetto array of 4.6gb drives as they were slower than the U-160 array. Since 5 10k rpm LVD-80 drives in RAID-0 are still faster than an ATA-100 drive, I’ll probably be sticking the Adaptec SCSI RAID 2100s card and the five drives into Plague to boost its loading times. I also wrapped some of the power cables to lessen their impact on the case.

The old look: The bezel looks pretty plain and silly, doesn’t it. Mismatched CD-ROM drives and a huge expanse of beige bezel = boring. 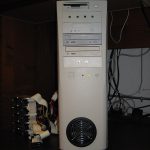 The new look: I added a second fan down low and installed a third fan into the 5-1/4″ face plates to cool the hard drives mounted in the bays up there. 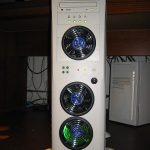 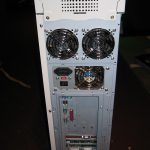 From the side: plainly visible are the four U-160 hard drives tucked nicely into the 5-1/4″ bays. They’re up in their own area with a separate airflow over them. This way they don’t heat up the air as it flows towards the processors. 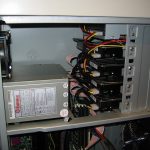 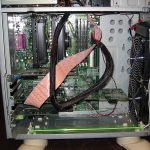 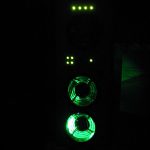 Headcrash and Earthquake side by side: