A while ago I was messing around with some unused water cooling parts and decided to build a poor man’s Koolance Exos. One the one hand, it cost me less than $5 to build (since I had the water cooling parts handy) so the “poor man” bit was correct, but as far as performing like the Exos, Heh heh heh… 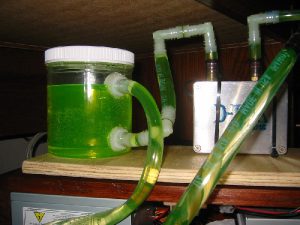 The $5 reservoir. Made from a plastic jar from Tap Plastic, two 1/2″ OD PVC barbs with threads for two PVC nuts. Add some silicone sealant and let dry. 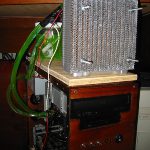 The radiator – an oil cooler from an Acura, I think it was. 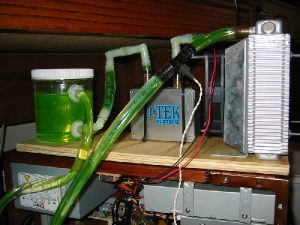 View from the side. I took out the elbow joints because they restrict flow. I originally had placed them to avoid kinking, but when I get this hardware (or something like it) into a rig, I’ll probably use some Swiftech coolsleeves to prevent kinking instead. 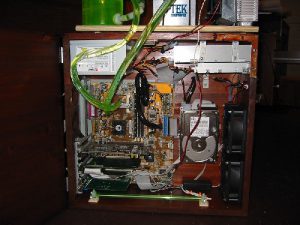 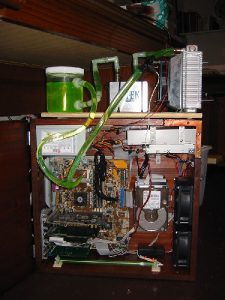 The poor-man’s Exos in operation. What a waste. Heh. It’s quiet and keeps things cold. That’s about it.