What gave me trouble, however was what was to hold all these goodies with attention paid to roominess, cooling capability, and of course mod potential. I eventually stumbled upon this review and then this article and this one over at Virtual Hideout and I made my decision. The Aopen HX08 would be my new house.

In building this case I also knew that I wanted to make my first foray into the wild, wacky world of water cooling. I had heard all the reasons why water cooling was the way to go, what with increased cooling performance, lower noise and what have you, but in all honesty, I did it because it seemed cool to have a water-cooled PC.

When the case first arrived I was in love. For some reason, this case has some much more je-ne-sais-quois than some of the other cases like some of the Antecs out there.

Yes, I know the photos are crap quality. I took them with a disposable camera, got them developed on matte photo paper and then scanned them at the amazing resolution of 150dpi. Someday I’ll be rich and be able to drop wads of cash on a digital camera that I’ll use to only take photos of my cases. Until then, tough luck. 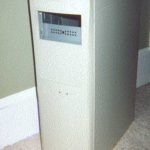 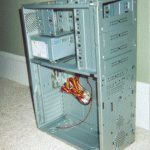 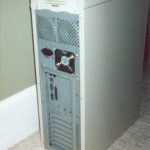 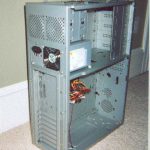 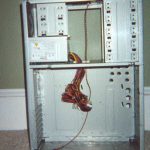 After some planning and figuring out how I was going to layout my case, it was time to put tools to case. The first tasks were to cut a hole in the front for the radiator and to cut away the stamped fan grills in the top rear. I’d be replacing them with chrome grilles that allow more airflow with less noise and would look nicer.

I also cut away some flanges where the lower 3.5″ drive cage sits underneath the 5-1/4″ bays. These flanges got in the way of the shelf I would be building to hold my reservoir to get it out of the way. I also measured and drilled holes in the floor of the 5-1/4″ bay cage to hang some bolts that would be the supports for the shelf. 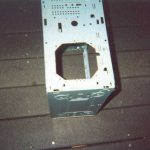 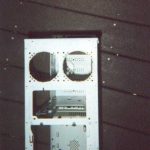 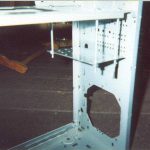 Which parts to buy for my cooling loop turned out to be the hardest part of this project. There are as many discussions about cooling methods as there are discussions about Intel v. AMD chips. Since I was (and probably still am) a cooling newbie, I opted for a kit that did most of the choosing for me. I went for a submersible pump and heater core radiator with 1/2″ fittings. I opted for the fan shroud option for my rad to optimize airflow. I never did get around to seeing what the difference was with it or without it, but I had it, so I used it.

If I were to do it again, I would probably pick and chose my components from many different vendors, and probably save a little bit of money, but at the time I wanted to jump into the watercooling game as fast as possible.

The five pictures below show my cooling setup as it comes together. I was originally hoping to put in a 4″ PVC elbow joint over the fan to duct the heated air out through the side of the case, but I ran into space issues. The duct wouldn’t fit between the fan and the tails of the PCI cards once the motherboard was installed. Instead I added an 80mm fan between the rad and the pump shelf, hoping to introduce unheated air into the bottom of the case to minimize the effect of having the heated air from the radiator pass into the case.

Pictures three and four show the red rubber matting I used to dampen vibrations from the pump. I went for rubber sheeting used to pad 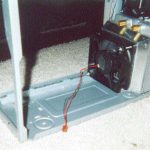 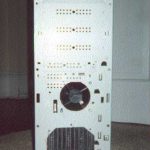 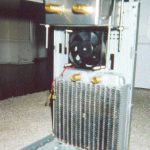 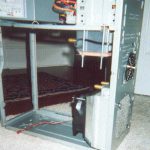 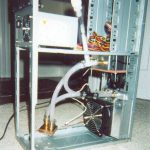 linoleum floors and is available at most hardware stores for like 10 cents a square foot. Needless to say I have gads of this stuff now.

The first wiring I’d ever done of cases was for the two switches on the floppy drive cover of Plague. I wanted to do a better job on this case and had all my parts purchased from my local Electronics Plus. However after I’d added up all the parts, I found that I could buy myself a 7v-off-12v baybus from PC Mods for less money and I’d get a higher quality product for far less effort.

I ended up wiring the dual 80mm exhaust fans in front of the upper drive cages, the 80mm intake fan and the 120mm radiator fan to the first three switches. The fourth is currently unused but I’m planning to install a chimney fan on top of the box which will be wired there.

The finishing touches were wiring the temperature probes from the DigiDoc to various places and installing the hardware. Nothing really special about that that’s worth mentioning here.

The last two pics are of my system as it looks now. It turns out that the case is just barely big enough for all of my components and appears rather cluttered. At least you can see how all the components fit into the case.

The top pic shows the drive cage with the 80mm fans and two SCSI hard drives, the 5-14″ cage with a CD-ROM, a CD-RW, a 12/24GB SCSI tape backup, black wires from the DigiDoc, the air bleed off tube and power leads out the wazoo. 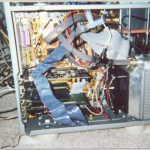 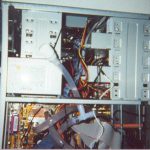 The bottom pic shows the rat’s nest of 1/2″ tubing, the fan-duct-radiator combo, SCSI and CD-ROM ribbon cables, the pump shelf and the rest of the PC hardware. The bolts have since been trimmed to length but I have yet to wrap my cables.